Pakistan has become an attractive destination for tourists: Italian Ambassador 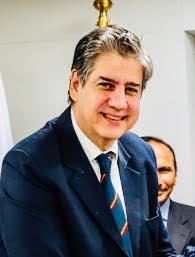 Former Italian ambassador to Pakistan Stefano Pontecorvo has said Pakistan has become an attractive destination for tourists. The senior diplomat said Pakistan needed to visit beautiful sites. Princess Beatrice, a member of the British royal family and former prime ministers of Spain and Italy are in Pakistan for a ski trip. On Saturday, Prime Minister Imran Khan was called by a group of prominent leaders from Europe.

Ambassador-at-large for trade, Special Assistant to the Prime Minister on Overseas Pakistani and Human Resource Development Zulfi Bukhari and Ali Jahangir Siddiqui also attended the meeting held at the House of Prime Ministers.

Prior this month, UK ambassador to Pakistan Christian Turner, took part in a worldwide skiing festival in Malam Jabba.

He praised the Pakistan Air Force and the Winter Sports Federation Pakistan for organising the tournament.

Last month British Princess also visited Pakistan. Princess Beatrice visit is the second by a Royal Family part in this year. Last year in October, Prince William and Kate Middleton visited Pakistan on a five-day visit. During the excursion, the Duke and Duchess of Cambridge visited Pakistan’s culturally rich city of Lahore and the beautiful valley of Kalash in Chitral.